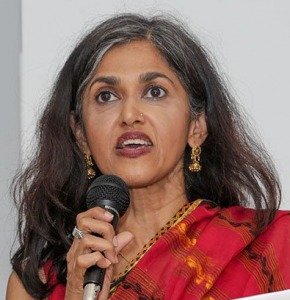 An award-winning writer and artist, Sehba Sarwar creates essays, stories, poems, and art that tackle displacement, migration, and women’s issues. Her poems and essays have appeared in New York Times Sunday Magazine, Asia: Magazine of Asian Literature, Creative Time Reports and elsewhere. Her short stories have been anthologized with Feminist Press Akashic Books, and Harper Collins India, while the second edition of her novel, Black Wings, was released in spring 2019 through Veliz Books.

Born and raised in Karachi, Pakistan in a home filled with artists and activists, Sarwar is currently based in Los Angeles where she teaches, writes, and offers talks.

The story of “Clark Rockefeller,” the former San Marino resident who became a person of interest in the disappearance of John and Linda Sohus in the mid-1980s was one of two cases that local forensic handwriting expert Sheila Lowe walked the audience through. In this instance, she talked about the uncertainties regarding the authorship of several documents claimed to have been written by Linda Sohus. Sheila demonstrated patterns of consistency, as well as uniqueness, one would need to see as part of reaching a forensic handwriting conclusion. To have learned those specific secrets, you’d really have needed to been there, as much of this presentation relied on visual illustration!

Sheila also shared insight on another famous case regarding a couple called “The Ken and Barbie Killers,” plus gave the audience a few challenges for identifying the personalities behind handwriting samples. A key takeaway Sheila mentioned at the end of the talk is that patterns in handwriting can at best be predictors of behavior, not a guarantee. 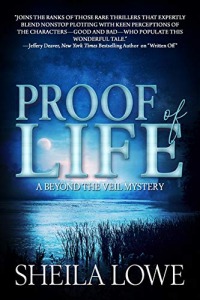 Sheila is the author of nine mystery novels and six nonfiction books on handwriting psychology. Like her fictional character, Claudia Rose, Sheila Lowe is a real-life forensic handwriting examiner. The mother of a tattoo artist and a former rock star, she is a transplanted Brit who lives in Ventura. She’s published five nonfiction books on handwriting psychology, seven in the Forensic Handwriting Mysteries series, and two in the new Beyond the Veil Mysteries. Sheila is president of the American Handwriting Analysis Foundation, a 50 year-old non-profit educational organization and is on the board of directors of the Scientific Association of Forensic Examiners. She is often seen in the media when there are cases involving high profile handwriting. Her latest novel, Proof of Life, is in her new series, Beyond the Veil Mysteries.

MEMBER ARTICLE – What I Learned Helping to Promote FATALLY HAUNTED